‘Naomi is that rare thing: a performer with a unique voice, musicality and technical excellence, whose keen interest in development allows her to expand her skillset in increasingly exciting and valuable ways. With her passion, dynamism, holistic approach (inspired by her studies), generosity and collegiality - all qualities of enormous value to the profession on their own - she is not only an extremely welcome collaborator in almost any situation, but an inspiration to all who work with her. She offers much needed vision and energy as we emerge from the challenges we face today.‘

Since the start of the Covid lockdown period, Naomi has been collaborating with the fascinating composer, Sarah Angliss on a variety of exciting ideas.  They are using the sounds of each others’ instruments to compose for each others’ music – for example, viola d’amore and this old portable squeeze organ!  Sarah is guiding Naomi into new territory with sound patches / midi and even trying to use the Zoom delay in a creative way.  Naomi has invited 21 singers from 3 generations to create a new piece on the poem ‘Liberté’ by Paul Elouard which Sarah will also feature on.  Listen out for BBC Radio 3 and 4 appearances of these works in the coming weeks.. the project is in aid of Refuge.

I am currently compiling a large collection of lullabies from all over the world with my very own mum who is from Bern, Switzerland!  We have over 50 from 20+ countries and are still hunting for more.  We plan to record them when the COVID period ends but in the meantime will develop the concept, arrange the songs, choose instrumental music to be woven into the tracks, make demos and playlists in the meantime for families to enjoy during this trying period and develop the art work with artists.  Our aim is that the sound world will be for all ages to enjoy and to encourage the nourishment of family time with a multi-ligual perspective.   Here’s screenshot of our weekly meetings on ZOOM looking at one of her favourite existing German book of lullabies. 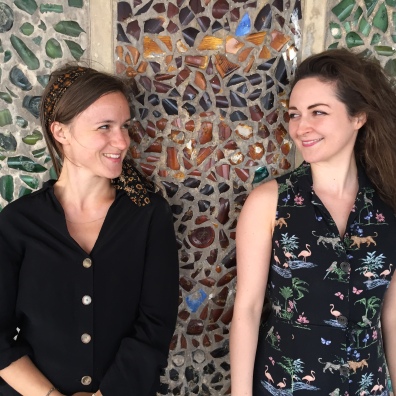 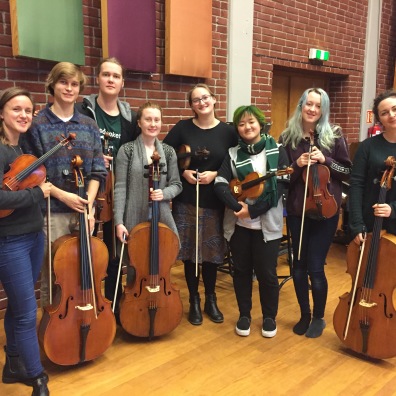 With fellow creative string player, Zosia I have a violin – cello duo. Funded by Help Musicians UK, I invited percussionist Michaela Antalová to join us for a residency at Madstun, north of Oslo in October 2019. https://www.madstun.com&nbsp; I developed musical material using Norwegian texts by Olav Hauge and original poetry on the theme of ‘HOME’ inspired by moving to the south coast.  We also gave a workshop on TEXT – SOUND- GESTURE in a high school in Toneheim. https://www.toneheim.no 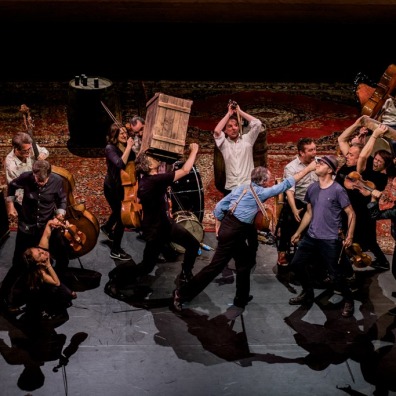 Naomi has been involved with Norwegian violinist Bjarte Eike and his exciting ensemble Barokksolistene in its various guises, since 2016. Winners of the Opus Klassik Award (Classical without borders) in 2018, they are challenging genre parameters and play at both folk and early music festivals alike, including Regensburg Tage Alte Musik (DE) through intimate cross genre festivals such as Werdenberg Schlossmediale (CH) and Rorøs Vinterfestspiel (NO) to a two month residency at Oslo Opera House in 2019. This included a unique collaboration with the Norwegian Ballet for Purcell’s Dido and Aeneas directed by Andreas Heise. On occasion, she has been lucky enough to perform as a guest with the acclaimed Alehouse Sessions, including on the “Statsraad Lehmkuhl” – a 3-masted steel bark at the St. Magnus International Festival on the Orkney Islands.

As a chamber musician, a highlight in 2017-18 was her residency at Handel Hendrix in Soho playing with Jacopo Raffaele, some months later with Andreas Gilger and she recently returned with her new trio with Gavin Kibble (gamba) and David Gerrard (harpsichord). She also has programmes with lute and solo programmes, which is sometimes in collaboration with choreographer and dancer, Justyna Janiszewska with whom she has worked with on several projects including at The Place and at Brighton Early Music Festival.
https://handelhendrix.org
https://cargocollective.com/justynajaniszewska

Naomi has played with Solomon’s Knot since it’s earliest days in 2009. They have a growing reputation as one of the UK’s leading ensembles with a strong emphasis on communication. Their first CD recorded at Milton Court came out in 2019 and she was concert master with them for the first time in December 2019 for a project of Charpentier.  Here she is trying out the ‘french bow grip’!

Initiated and curated by cellist/gambist/French scholar Jonathan Rees, this project explores French street songs from the Pont Neuf in Paris, during the rule of Louis XIV.
On June 29th 2019 they tried to re-created the feel on a bridge in Durham before performing a semi-dramatised set: https://www.dur.ac.uk/whatson/event/?eventno=42765

With composer/instrumentalists David Gordon and Red Priest’s Adam Summerhayes at the helm, this ensemble explores their music woven with corresponding early music repertoire. Naomi was also commissioned to write a composition for the Swaledale Festival in 2017 which was a baroque/folk suite called ‘Larkengarth Lasses’.

Formed from a successful series of tours as European Union Baroque Orchestra (EUBO) 2009, the members formed an orchestra in 2010 which gained a place on the coveted Ambronay residencies for young ensembles Programme. This led to a recording of Mozart’s clarinet concerto and the Requiem for which she was concert master. The orchestra also played with Edward Higginbottom in Oxford for a recording of Haydn’s Nelson Mass and played at the National Portrait Gallery for a WW1 commemoration event with the resident Portrait Choir.

Alongside her theatrical hero, Mark Rylance, Naomi was part of Clare Van Kampen’s Laurence Olivier / Tony nominated, ’Farinelli and the King’ production at Duke of York Theatre in 2016. Later that year, she played in ‘All the Angels’ by Nick Drake about the first performance of Handel’s Messiah at the Sam Wanamaker.

With members James Toll, Peggy Nolan and Sam Kennedy, the quartet principally explored the works of Boccherini. They were finalists in the York Early Music International Young Artists Competition in 2011 which was broadcast live on BBC Radio 3 and were participants in the Brighton Early Music Young Ensembles scheme. With the generous loan of four suitable instruments from the Becket Collection, they recorded four quartets/quartettini by Boccherini produced by former member of the London Haydn Quartet, violist James Boyd.

This is a growing collective of musicians who share a wish to support the work of the climate change movement Extinction Rebellion, by playing baroque music as a peaceful protest at demonstrations which target a variety of climate change issues such as BP’s sponsorship of various organisations across the Arts.

Naomi also plays with artists outside the world of classical music including with Sting, James, Bring me the Horizon, The Architects, Blossoms, Charlotte Church, Michael Bublé, The Travelling Band and Tim Booth.  She has played for Parallax Orchestra, Secret Cinema, at Abbey Road Studios, the O2 and MEN Arenas and at lots of UK festivals including Glastonbury, Latitude and Wilderness.  With fellow string players Zosia Jagodzinska, Sophie Cameron and Alison De Souza will be on the London-based electropop duo from London, Kaleida’s forthcoming album.